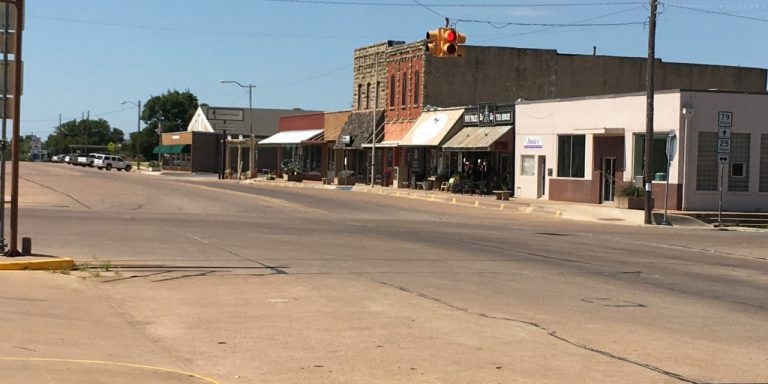 The temperature notched a hundred and two degrees in Archer City, Texas, and its lonesome ghost was restless again. Her hundred-year vigil finally convinced Lottie Belinda Gibbs that her little life had been visible only to God, and her simmering rage cooked the air in town to a turn.

Nowadays, Lottie wove the web Archer citizens knew as their life. Their deceptively simple days were her embroidery, a craft she learned under her mother’s tutoring eye. She was as visible as the noonday swelter on Center Street, but no one ever saw her. Lottie had become the barn spider no one killed because it kept flies from tormenting the livestock. She haunted a place she’d only ever left twice, both times on horseback with her husband Mason, to deliver stillborn children.

No one ever paid any attention to her, alive or dead, and that was precisely the problem. Hurt nursed for a century becomes a potent decoction, with the power to shift time. Suddenly 1932 was right up on her, with all its drought and despair. How does that happen? As she wondered, a small dust devil whirled in a dirt lot across the street, where a general store once stood. Lottie remembered how her mother, deep in wall-eyed senility, could suddenly recall the cut and color of a dress she wore 75 years earlier, but not her quietest daughter’s name. It must be something like that.

Lottie Belinda and Mason Gibbs could not have their own children, but they tried. Born third of seven infuriatingly fertile sisters, Lottie’s womb produced silence. Of all the indignities she suffered, worst was her family’s nodding compassion. With no children of her own, she now caught townspeople and kept them close. Some simply found themselves unable to leave. Others she caused to return, driven homeward by an unquiet notion of something left undone or needing repair. Gradually but inexorably, they found their way back to Archer with the unerring aim of sleepwalkers. They bought and renovated abandoned buildings, and ran for public office. This time they’d get it right.

She could tell them why they came back, if they would ever ask. She could tell them everything – why the oil dried up, why the rains didn’t come, why their hearts ached and beat on anyway – and most of all why, beneath a sky studded with stars, a Texas night was still a jet-black lake. No one thought to ask her. No one ever asked Lottie anything of consequence, except for Mason Gibbs, and she was so astonished she married him. Their union was sixty years of nothing in common but word puzzles, but he proposed with an acrostic. The third letter of the third word (hadn’t she been the third child?) in each of fourteen lines Mason wrote for her spelled out “will you marry me?” She looked up in amazement and met his glistening mahogany eyes, and thought him so clever she said yes on the spot.

Years of childlessness, though, finally wore Mason down. During their early sexual encounters, Lottie felt she was witnessing a secret indulgence, which Mason shared only because it was his bounden duty to do so. It was endearing, the way he bucked up and made love – eyes closed, face averted, tightlipped and game. Looking up, all she could see was his flushed profile with its sharp Adam’s apple, like something etched on a coin. His rhythmic breathing paused only when he arched his back and released. His duty done, he raised himself slowly off of her, sat at the bedside with his head bowed, and prayed for the child that never came. As a young girl, Lottie was awestruck; she’d never seen anything so private. As a grown woman, she never felt more alone. Remembering her taciturn, devoted husband, and the way he respectfully held her shoulders just so when they made love, she felt her chest tighten just as it did the afternoon she died, and the temperature in Archer rose another degree.

Her sharp longing carried her up and over the junction of Center and Main, where just then, four cars arrived at the blinking light together, and wondered which would go first. From where she hovered, she could see the cross Archer was nailed to. She spread her desolation long and wide as both intersecting streets, deep into neighboring counties, and fastened herself to the bottom of the sky. They might not see her, but Lord, they would surely feel her. The memory of a groan caught in her throat, and out came a rumble of thunder. She looked down on her birthplace with welling eyes, and it began to rain.

Down below, people ran toward shelter with the urgency of children, all her little ones. Behind a lifetime of frustrated mother-love, Lottie Belinda’s heart broke open. A blocked wellspring cut loose becomes an implacable force. It has learned to be disappointed. You punish the living for the ones who died, and it was a torrent. Swift rivers coursed through the streets of Archer City, sweeping the gutters clean. Old pickups stalled, and the bank closed early. Rain drummed the parched earth, which first resisted, then yielded luxuriant ochre mud. The deluge refilled hand-dug stock tanks and bent fields of sturdy Johnson grass in half. It drenched the region, curving south from Archer City to Antelope (pop. 65), through Loving, past Graham, and clear down to Possum Kingdom Lake, where Mason’s ashes were scattered.

Lottie Belinda spent herself utterly. Her time-worn grief baptized the living and the dead. She must do better, she thought. She simply must. Why, people die all the time, she told herself, just as all her babies had, just as Mason had, just as she had. How many thousands of people had died? As crazy and stupid as it is, we mourn them,  and we keep them here.

Sometimes, there’s no way to tell letting go from holding on.

The form was sent successfully.
An error occured.