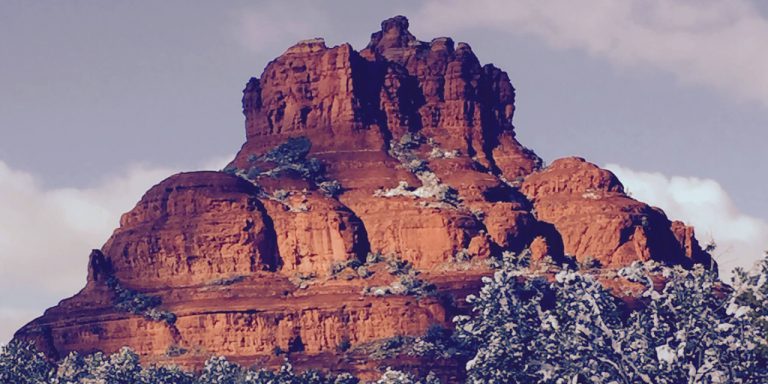 Magical Sedona, Arizona was named for the wife of its first postmaster, T.C. Schnebly. Apparently the original names he’d submitted, “Oak Creek Crossing,” then “Schnebly Station” were both rejected by the Postmaster General because they were too long to fit in the cancel stamp. Someone suggested he name it after his wife.

Sedona Arabella Miller Schnebly was a native Missourian, by all accounts a warm, able, generous woman who had defied her parents at age 20 by marrying a Presbyterian.  A brunette with a heart-shaped face, and large, dark eyes set wide apart, Sedona by the tender age of 25 had become the mother of the tiny town. Alma de casa. She bore two children, a boy named Elsworth, and Pearl, a girl. In June of 1905, young Pearl became entangled in the reins of the pony she was riding, and was pulled to the ground and trampled to death. Although she and her husband were to have three more children, Sedona never fully recovered.

I didn’t know for whom the city had been named, but I had heard of its extraordinary power. 110 years after the death of her daughter, I visited Sedona’s namesake for the first time, and waded into its blood-warm, mother’s-milk ocean. So this is a vortex, I thought. This is the earth’s idea of love. The sensation was encompassing, rich, and honey-sweet. It directed me to slow my gait, and synchronize with its fluid, deliberate time signature. Something consequential had clearly gathered here.

I learned the names and locations of Sedona’s famous vortices. Airport Mesa. Cathedral Rock. Bell Rock. Boynton Canyon. Convex and concave, yin and yang, all were magnificent red sandstone formations sculpted by wind and water and fluid time, and were powerful sources of subtle electromagnetic earth energy, each with its own particular character. By contrast, walking through “Uptown” Sedona: a dense beehive of souvenir shops, restaurants, and galleries, a cacophony of dozen different languages, and moving phalanxes of telephoto lenses. I tried to reconcile the noise alongside the sublimity, and could not.

As the story goes, when Sedona lost her daughter, she became inconsolably depressed. Fearing for her life, her husband returned her to Missouri. They stayed until T.C. decided he needed to make a living again. He returned to farming, this time moving the family to Boyero, Colorado.  For a time they enjoyed relative prosperity. Then, in quick succession: the Great Depression, a disastrous, livestock-decimating blizzard, and an anthrax epidemic.  T.C.’s subsequently weakened health meant a move to a warmer climate. The family, now with three more children, headed south to Phoenix, then finally again to Sedona, the town they helped establish.  Their homestead was gone. They lived with Ruth and Walter Jordan, who owned orchards and had established a farm.  T.C.helped when his health permitted, and Sedona helped Ruth, who was a teacher, with the washing, the cooking, and the care of her three children, along with her own.

Along with her loving nature, Sedona Schnebly’s tragedy became embedded in the character of the town, and a century and a decade later, Sedona’s sacredness as a site now coexists with its exigent commercial outgrowth. The way lichen slowly covers a rock, holiness is concealed beneath a spreading gloss of those who covet it. Perhaps one of the intrinsic properties of sacred things is to veil themselves, the way an oyster knows to enclose its pearl.  Truth resists its seeker until it deems its seeker worthy, and a broken heart isn’t always stronger when it mends.

Sedona Schnebly was worthy. She had endured incredible hardships, traveling uncharted territory on what must have seemed a journey to the moon. With ingenuity and industry, she made a home, not just for herself but for others. She had squared herself to the rough magic of the west, made virtue of necessity, and in return had lost her daughter, and her heart. What was clear was that vortex energy is mother-love, eternal, unconditional, all-encompassing. It predated Sedona Schnebly, but it included her. She had given herself utterly. A heart can only be broken if it is open.

In the town that bears her name, Sedona was well-loved for her work with children, despite losing one of hers. She worked tirelessly to build a community church where people of all faiths would be welcome, and the result of her efforts was the Wayside Chapel, dedicated in 1947. Sedona died of cancer in 1950, and a bell in the new chapel was named in her honor. It rang out again on February 14, 2012 at 2:14PM, on the centennial of Arizona’s statehood, and Sedona residents were invited to bring their own bells to ring.  The riotous clamor of  untuned bells ringing together for once sounded harmonious. Cacophony transformed seamlessly into music, and somewhere, Sedona Schnebly smiled.

The form was sent successfully.
An error occured.